Last week end I attended the EP launch of "No Means Yes" for the fabulous Puppet Rebellion in the Northern Quarter, Manchester at Gulllivers on Saturday the 22nd of February. Gullivers is a pub and concert venue on Oldham Street.  I have seen the lads perform on a number of occasions previously, and they are a particular favourite band of mine. So, when they got in touch to let me know about their EP launch I couldn't say no. This is an intimate venue and provided a fantastic atmosphere throughout the night. There were four acts on that evening.

The opening act was David Liversidge an amazing singer and guitarist, who is also a talented song writer.  I had never heard David play before and was unsure what to expect, but was greeted with the most amazing vocals and acoustic guitar playing, as he lived up to his well deserved reputation throughout the Indie circuit. His set consisted of 8 tracks, including a brilliant cover version of the Fleetwood Mac number Go Your Own Way that had everyone, ( including myself,) singing along.

The set included Take my Hand, Far from Home, Another Way, Millie and Me, The Voice and  Art Cafe.

One of the funniest parts of the evening involved a fellow blogger Squarepig and Gareth Kilshaw, who has donned fake red pirate beards to show support for David, who appeared suitably impressed. 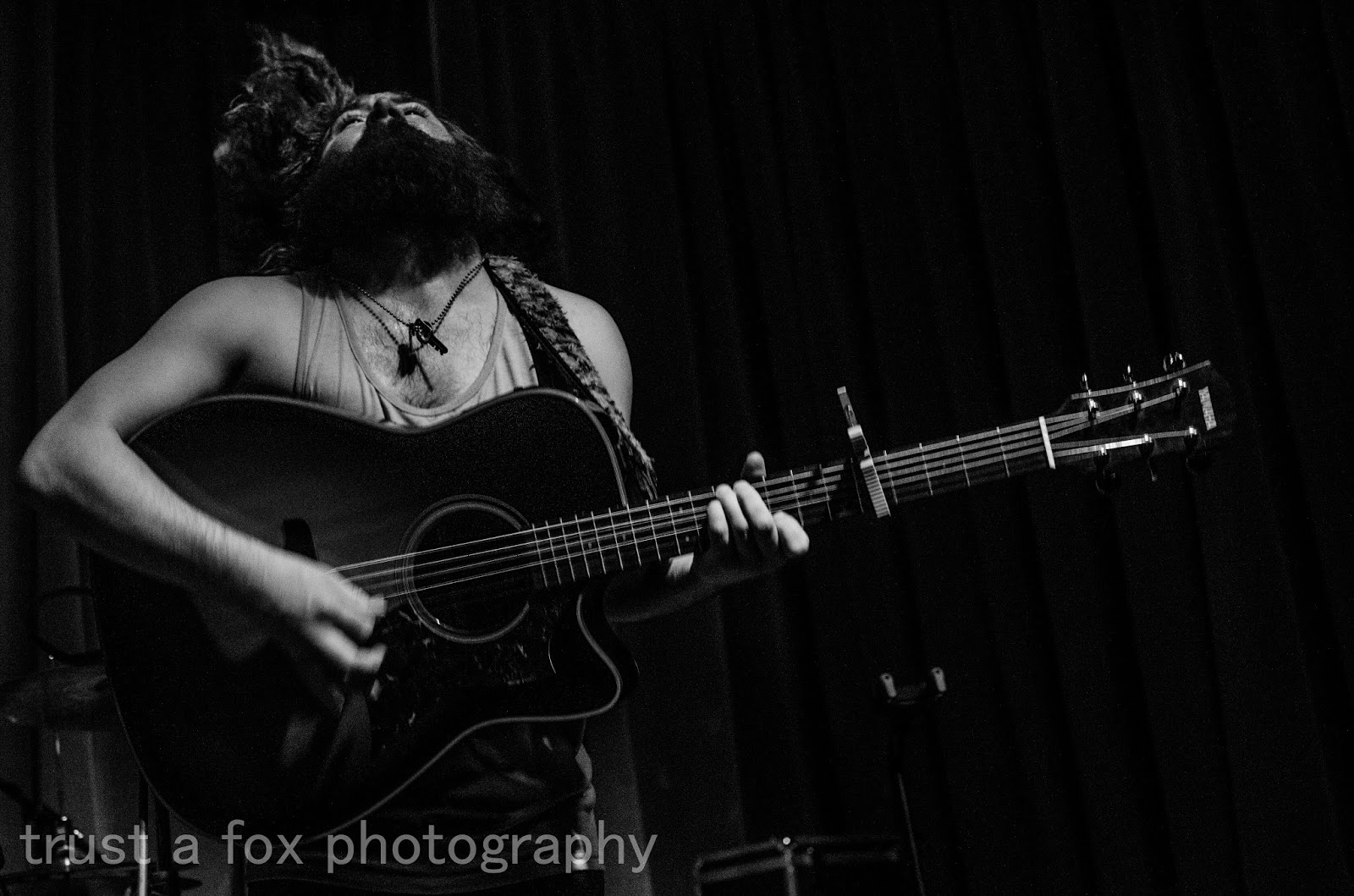 Then second act of the evening was The Wax Collection, the band was founded in January 2011. They describe their style or genre of music as "Lolloping, semi-psyche bourbon-beat." This was yet another band I hadn't heard or seen before. The "Sound's of the 60's" was the thought that popped in to my head as I listened to their numbers. With strains of The Beatles and Cream springing to mind. Very vintage pop/rock psychadelia. Loved them and would happily watch them again without a second thought. Another band that are destined to go far.

A four piece band, their line up was Benjamin Lewis - singer/guitarist and founding member of the band, Rick Less- Bass player, Matt Allison - vocals and guitar, and once again, last, but not least the drummer was Rory Swierc.


The third act was the very talented group - The Darlingtons. I had heard good things about this young band but again, never seen them live. They virtually exploded on stage and took it by storm, never letting up or slowing down throughout the set. The energy was unbelievable to witness and the the crowd rose to the occasion, picked up on the energy and ran with it. Their set list was Rotations (apparently a brand new track) , Ships at Sea, Don’t Give Me Hope,  A Song For Someone Else In Time, Everything,  Watch Yourself, Sirens and the final song was Flashing Lights.

The line up of The Darlingtons is Kiran Roy - vocalist/guitarist, Daniel Young - lead guitar, Alex Bispham - bass player and last, but not least Chris Holmes on drums.There latest single "Don't Give Me Hope"  has received glowing reviews.

The crowd by the end of this set, was not only warmed up, but almost incandescent. Setting the scene for the main event, the fabulous Puppet Rebellion.

I first heard of Puppet Rebellion when they contacted me on Twitter and sent me a demo track of The Greatest Lie Ever Told. The band was originally formed back in January 2013. I was so impressed, that I attended their first live gig back in 2013. on the 6th of April at the Dry Live on Oldham Street. Their performance was so polished and authentic, that it seemed as if the band had been together,forever. The band have since gone from strength to strength and developed a huge following in the process. 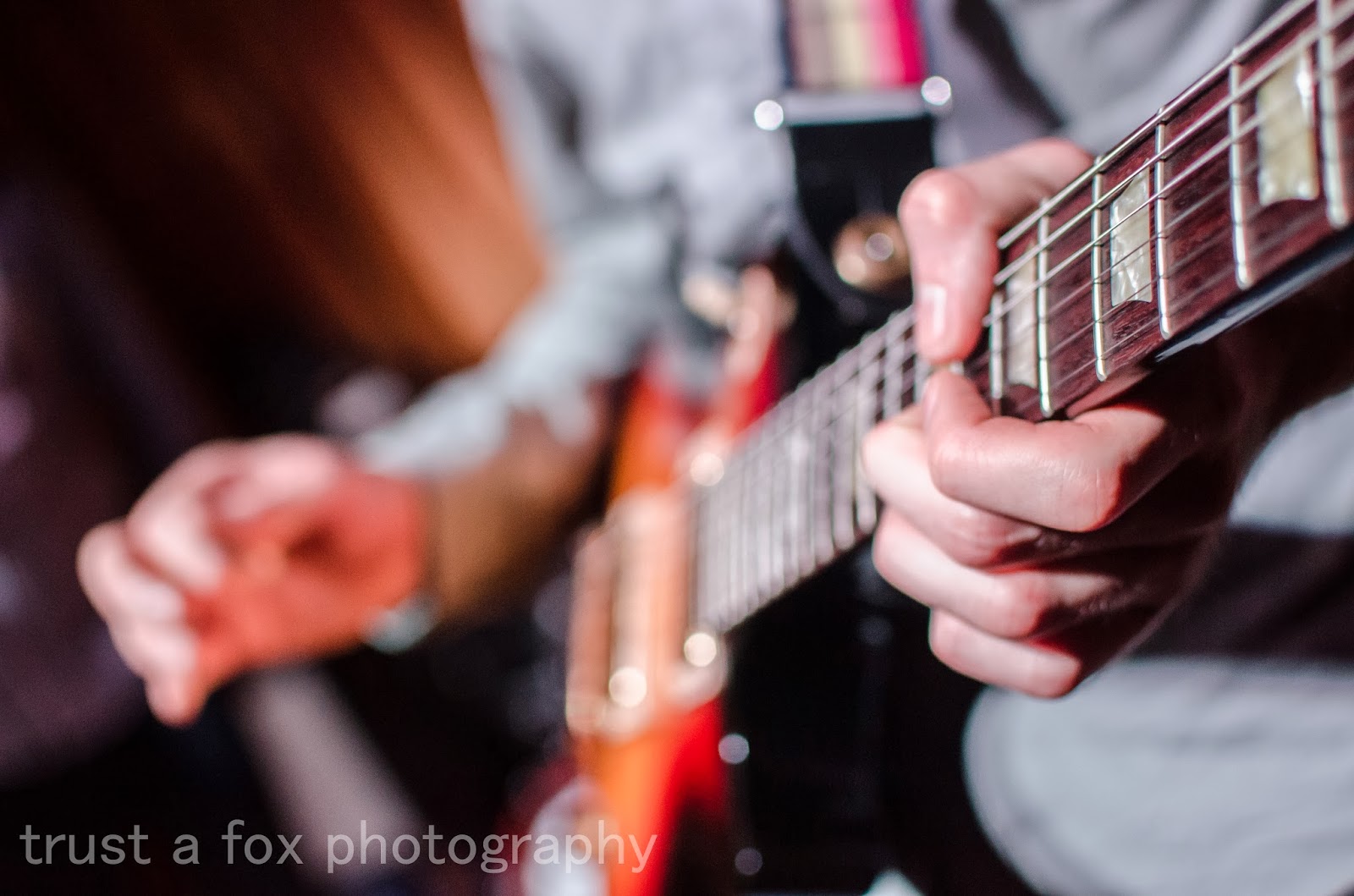 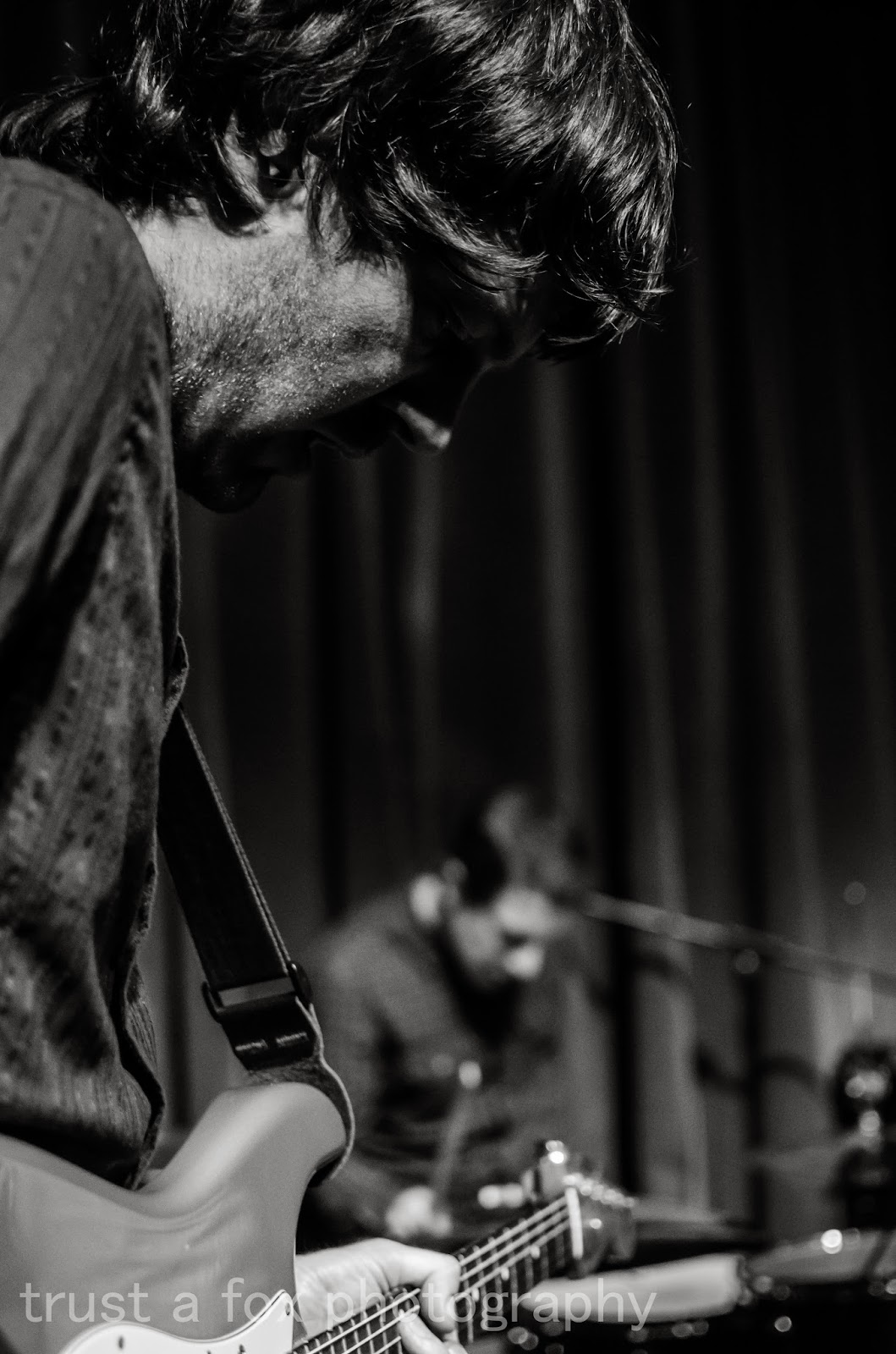 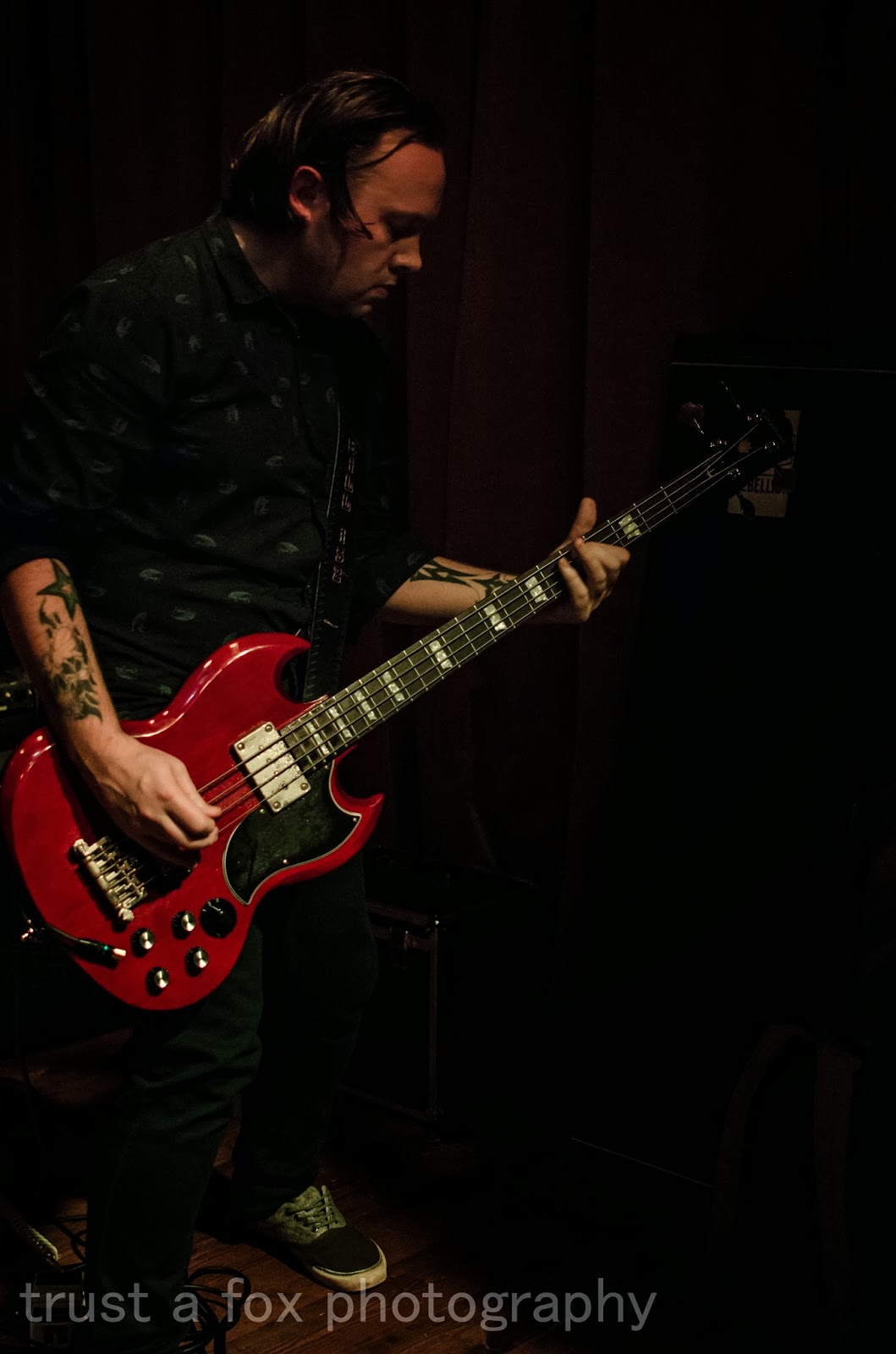 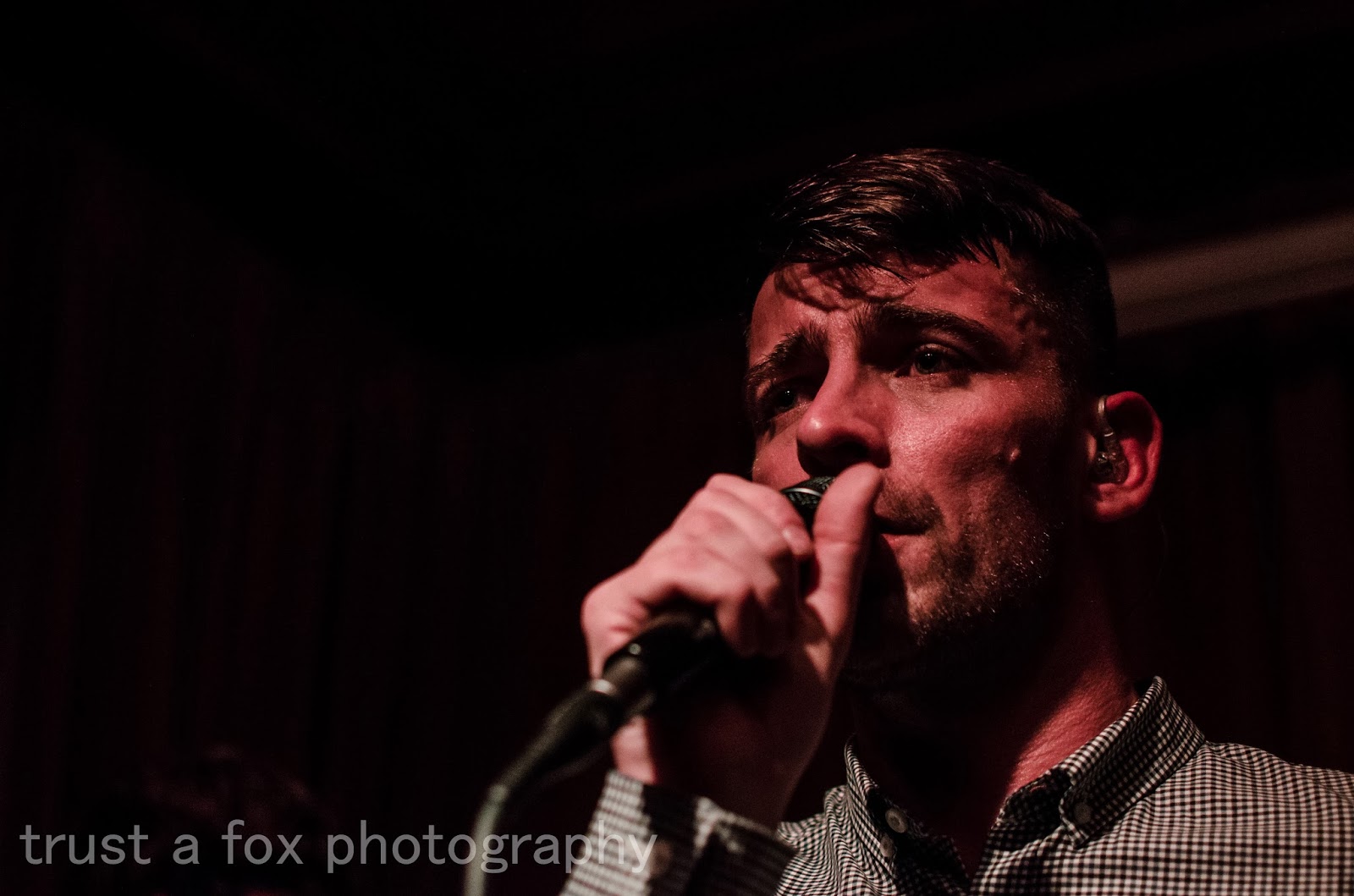 They began their set with Chemical Friends, followed by Pirouette, Cupboards Painted Red, The New Twenty,  Loner In Disguise, Time To Lie, Green Eyed Monster, Tame Imposter, and ended on the first track I had ever heard from them - The Greatest Lie Ever Told.

The gig as a whole worked like a charm, as there was so much light and shade with the various acts on that night - something for everyone. This gig was the first the band have arranged for themselves, and a very brave undertaking, and was a huge success - well done boys. By the end of the set the whole audience was dancing and singing along, the atmosphere was amazing and electricity in the room was palpable.


The band next play


Please go and show some LOVE to all of the bands and better still, go and support them. It isn't expensive and I know you would have a fantastic, atmospheric night.

to my very good friend Suzy Ayers. Come on in Suzy and take a pew.

She writes in a fashion where it may seem archaic (gasp), she writes everything by hand and has many notebooks. She never plans a story and yet somehow it unfolds: the plots, the characters and the happily ever after endings. She is a true romantic at heart so despite the pain and heartbreak through the series know that there is happiness for Sara.

The first book is Sara’s Awakening ~ ELEMENTS –The Before World: Book 1 has been on the Amazon Bestseller’s List a couple times for metaphysical and visionary fantasy. Sara has visions through dreams and she only begins to learn about her powers in the first book. She also finds out what true love is in this romantic fantasy, but her feisty nature stirs up quite a lot of trouble. She also finds that the loss of her mother isn’t the only pain she will have to face.

Princess Sara Rosen must learn her role as Thomas’ wife and juggle being a new mother. Happy to be where she thinks she’s meant to be, believing she’s completed her destiny. However her fate and her dark dreams have barely begun.

Her powers have grown exponentially; as she uncovers a frightful new burden she must bear. Additionally, she questions Thomas’ fidelity and her own. Trusting no one and not even herself at times, she must protect a new secret and her family.

Continue on the journey with Sara and the Rosen family in this: sci-fi, futuristic, romantic fantasy… in the name of love, loss, and magic.

This book includes: Shapeshifters, visions, premonitions, magic, spells, poisons, Sorcerer’s, a Wizard, Witches, death, sexual situations, and is considered to be a book for adults 18+. This book contains 86,000 words.

Sexy Holiday Bites is where you will first learn about Damien, Sara, and Thomas. It’s a free book of flash fiction that features voyeurism and (gasp) sex. Grab it and enjoy all the stories from these hot authors year round.

The Book of Paul by Richard Long

Book Blast, The Book of Paul - ON SALE UNTIL 9th February!


Currently on the bestseller lists for Dark Fantasy and Horror!

In the rubble-strewn wasteland of Alphabet City, a squalid tenement conceals a treasure "beyond all imagining"-- an immaculately preserved, fifth century codex. The sole repository of ancient Hermetic lore, it contains the alchemical rituals for transforming thought into substance, transmuting matter at will...and attaining eternal life.

When Rose, a sex and pain addicted East Village tattoo artist has a torrid encounter with Martin, a battle-hardened loner, they discover they are unwitting pawns on opposing sides of a battle that has shaped the course of human history. At the center of the conflict is Paul, the villainous overlord of an underground feudal society, who guards the book's occult secrets in preparation for the fulfillment of an apocalyptic prophecy.

The action is relentless as Rose and Martin fight to escape Paul's clutches and Martin's destiny as the chosen recipient of Paul's sinister legacy. Science and magic, mythology and technology converge in a monumental battle where the stakes couldn't be higher: control of the ultimate power in the universe--the Maelstrom.N

A best-selling novel, The Book of Paul is the first of seven volumes in a sweeping mythological narrative tracing the mystical connections between Hermes Trismegistus in ancient Egypt, Sophia, the female counterpart of Christ, and the Celtic druids of Clan Kelly.

"Long's prose is deft and clear, transporting the reader from one character's psyche to the next...this tale is a compelling one. A psychological thriller for readers who are bored with run-of-the-mill horror...Those who embrace the genre will eagerly anticipate a second installment in the series." - Kirkus Reviews

"Intelligent, self-aware, and often amusing...hitting all the markers for sadistic, salacious, and scary. Long is doubtless going to build a large and loyal fan base composed of people just like him: literate folks with a bizarre sense of humor who prefer a bucket of blood to a bath filled with rose petals." - ForeWord Clarion Reviews

"Totally absorbing! The Book of Paul is moving, profound, funny, terrifying and never lets you go. The prose is swift and sharp...at times, even poetic. Masterful storytelling. Hats off!!" - Henry Bean, writer/director of The Believer.

Over 100 five star reviews on Amazon and Goodreads!


The Book of Paul crosses a number of genres. Sometimes when I’m asked what kind of book it is, I’ll say it’s a dark, paranormal thriller with occult horror themes, mystery, suspense, erotica and black humor. Other times, I just say, “It’ll really curl your toes.”

Tastes like Animals - an up and coming, young, new band, to watch out for.....


In late September last year, in fact the 20th, it was a Friday, I watched a fantastic young band called Tastes Like Animals at a little advertised gig at Barca, in the Castlefield area of Manchester.

Unfortunately for all the artists on the bill that night very little advertising appears to have happened, as a resultant attendance was not only poor, it was dire!

I felt very privileged to watch them play though, such a waste of talent for them to play to such a small audience. On the plus side it was an amazing set and well worth the visit. 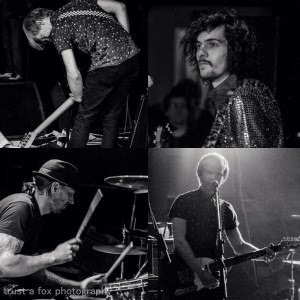 
Tastes Like Animals came together after the demise of a band that had achieved all it was able to achieve. It was the drive, passion and taste for the stage of the two surviving members Phil (guitar/vocals) and John (drums) that brought Tastes Like Animals to life!

After a couple of jam sessions together with Phil at the helm on guitar and vocals they realised it was time to look for a bass player. Mostly through chance they were introduced to Matty (bass), who had been playing guitar and bass for a number of years and was looking for a band. Matty completed the feel and sound the band was always meant to be. The rest they say is history!

Roughly a year on and Tastes Like Animals are going from strength to strength. Currently recording songs at Project 9 Studios in Winnington with Andrew Spence as producer. Tastes Like Animals continue to venture out to bigger and better venues, honing their skills and sound on the stage! 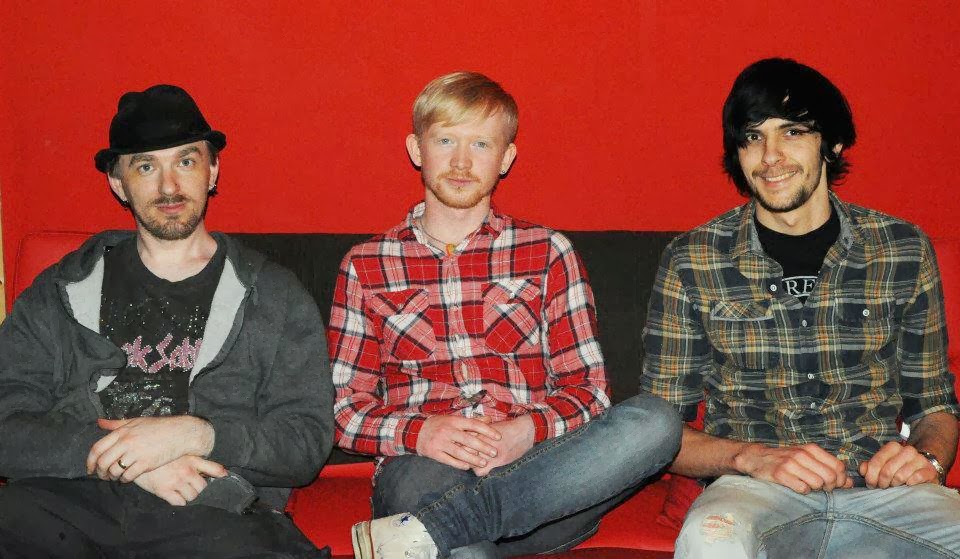 These include the Foo Fighters and Jack White.

You can find the band here on

Check them out and show them some love

and say Scarlett sent you 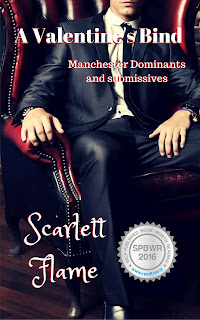