For the whole of the month of October I will be featuring all things #paranormal and #horror.

Join me and find some amazing offers, giveaways and new authors that may whet your palate.

Join me throughout the week and enter the rafflecopter to win some amazing prizes. Just follow the instructions to enter. 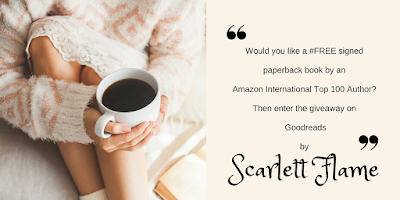 First up I have my good friend J F Holland 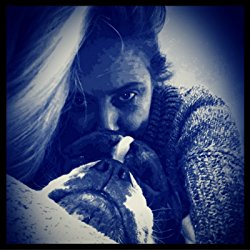 I still live in the small town in Partington in Manchester, UK.  I was born at home on January 10th 1968.  Now a wife and mother, I live with my husband and 6 children, and a small menagerie of animals, still in the town I was born, raised, and attended school.

I've always loved the underdog, the fighter. But, let's face it, we all want to believe in a happily ever after. As a huge fan of books (book nerd is the endearing term, my children use), as I have an immense romance collection (which also includes paranormal romance). It usually means if I'm not writing, I've got my head stuck in a good book.

You can't beat reading. I love watching the plot and characters come to life in my imagination; so much better than television. When I was younger, I tended to re-write books and fairy-tales where I wasn't completely happy with the ending. It confused the hell out of my children once they learned to read as none of the books matched the stories I'd been reading to them growing up.

Until I became ill, I had a varied career including Admin, Customer Service, and Teaching unemployed adults IT and customer service skills.  I'm now at home full time, classed as disabled (neuro fog can make life, and writing fun and challenging at times). So instead of twiddling my thumbs and feeling sorry for myself, I decided it was time I started to do something which I love with my life. So, I began to write my own stories again, it keeps my mind active and it's fun. I'm also happy to receive feedback about my books (stories) or just to connect :-
I’m proud, and excited to share that I will have a short story and 2 full length books coming out in the next year or two for Charity anthologies.
facebook:- www.facebook.com/JFHollandRomanceWriter
Facebook:- www.facebook.com/BoundandMatesFanPage
Twitter:- @JFHollandwriter
via e-mail:- jfholland_author@aol.co.uk
Goodreads:- https://www.goodreads.com/author/show/14663607.J_F_Holland
Amazon page:- https://www.amazon.co.uk/JF-Holland/e/B01358PX32
or you can visit my website:- http://www.jf-holland-romance-author.co.uk

My First book in the Bound Series, a Paranormal Shifter book. 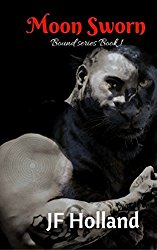 Maya Rawlings was orphaned and knows nothing of her family history. She's spent her whole life feeling that there's something missing. All she wants is to belong and to have a family of her own, the only problem with that is she's not found a man she's attracted to.

Jaden Matthews has been on this earth for longer than he cares to remember. A loner who never settles in one place for too long. One night his life changes though as the mark appears on his hand that signifies his mate has been born. He now has 21 years to wait for her to mature and then the clock will start ticking. If he can't find and bind her to him before the last full moon sets on her 26th birthday, he'll not only lose his humanity, but also his immortality.

The only problem is he doesn't know where to find her. Although he can talk to her in her dreams he has to be careful because she isn't aware that there are more than humans walking the earth. He's running out of time and patience, but he's getting closer. Can he use his skills to get her to agree to the binding, thus saving himself or will he forever be destined to walk alone as the animal he becomes?

Bound by The Moon is the 2nd Book in The Bound Series. Moon Sworn continues. 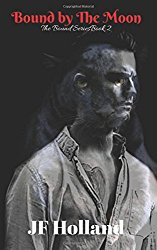 Jaden Matthews has now found, and fallen for Maya Rawlings, his mate. They need to perform the binding ceremony, but their plans are hitting a few snags. Namely the rogues', which are stalking Maya.

If they don't complete the ceremony, Jaden will become the Jaguar he shifts into, for the rest of the animal's life span. No more immortality, or humanity, and no more Maya, and forever.

Helena, Maya's mother, is back from the dead, and her cousin Lana, is also on the rogues' radar. The stakes have just gotten higher, it's no longer just Maya's life that is in danger. The battle has begun to keep Maya, and her family safe.

More immortals have offered their help to eliminate the threat. The rogues' actions, and indiscriminate kills are also threatening discovery by humans.

The game of cat-and-mouse has begun. Who will be the victor?

Fire in The Moon, Book 3 in The Bound Series latest release 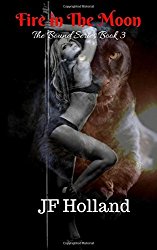 Balin Matthews has found his mate Lana Rawlings. Unfortunately, due to her past, and their unfortunate meeting in a lap bar, Lana is not best pleased with the mate fate has sent her.
Lara, Lana’s mother is back from the dead and against the pairing - so Balin is going to have to work extra hard to win over not just his mate, but also his future mother-in-law. A situation not helped when he has a Nymph, stalking, and determined to seduce him.
Things turn deadly when Maisie the black witch ups the stakes. Still pulling Davion, Lana's father’s strings, she hatches a plot to kidnap Balin to use as a bargaining chip.
Can Jaden and the other immortals reach him in time? Or will there be fire in the moon when the Phoenix let loose their inner talents?
Contains adult sex scenes, profanity and gore. 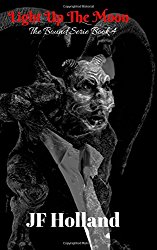 Balin’s recovery is uncertain, and there seems to be a new player on the field, a dream demon. The only problem is they don’t know if he’s friend or foe. Maisie is still out there somewhere, but is she still a threat, and if so can they find her?
Luc is now actively seeking a way to break the curse that Maisie put on him centuries ago. Could Sophia, the new member of Lana’s family be the key to his salvation?
The stakes are now higher for everyone, as there are more than one set of mates that need to complete the binding ceremony.
With rescues, scouting missions and binding ceremonies to be completed, can the immortals finally find peace, or once again, will their lives be turned upside down.
Is the new moon going to bring with it some closure or will it once again light up with yet more carnage as the immortals fight for their mates?
Contains profanity, adult sex scenes and violence (fight scenes).
https://www.books2read.com/u/4Ag6Je 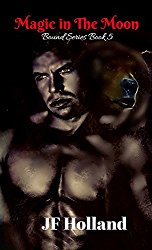 Bound Series, Book 5
Heated shifter romance
After their last battle, something comes to light that has the potential to throw the immortals into further turmoil and danger. Once more, they must band together. This time, not just to defeat an enemy.
After the sighting of a big cat in the area hits the press, and a dead body is found, they must also throw a reporter off their scent.
All they need is one night, so at least one set of mates can complete the binding ceremony and boost morale. It’s going to take skill, finesse and strategic planning.
With a bit of luck and a little magic in the moon, hopefully, they can pull it off.
Contains profanity, humour and adult sex scenes.
It can be preordered here:- https://www.books2read.com/MagicinTheMoon

Immortal Flame is the first book in the ‘Eternal Mates’ Series (an immortals dating site), a spin off from ‘The Bound Series. A standalone Vampire Romance and released on 4th August 2017. 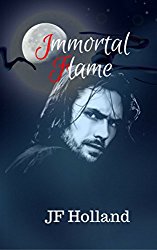 Meet Leonard Smyth, the vampire from The Bound Series, born January 1st 1547 in Herefordshire and now living in Lower Lunaton, the fictitious small countryside town in the UK.

What happens when your friend signs you up to a dating site? You end up with a date, one who’s a little more than you expected.

That’s what happens to Jill Henderson when her best friend Amanda Nolan signs her up with Eternal Mates, not understanding that it’s for immortals.

All Jill wants is a man with whom she has something in common… a faithful and not too good looking man… A man that isn’t too young or over the hill. What she gets is something a whole lot more and drop dead gorgeous to boot.

Leonard Smyth has been duped by Luc Beauregard, his once best friend. Now he’s got to date a woman he’s never met… not only that, but he must take her on five dates, and not sleep with her.

It should be easy, right? Wrong. Especially when the woman he’s now dating is not only a human, but also has no idea that he is in fact a vampire. What’s worse, his glamour is working too well and women are throwing themselves at him… well, apart from Jill.

The women he can handle, but Jill, now she’s an enigma. Leonard is shocked to find that Jill is a woman he would actually be happy to spend time with… and not just for a bang and bail. Now all he needs to do is keep his promise – and his hands to himself - or he forfeits the chance to heal the rift in his friendship with Luc.

Surely it’s an absolute doddle for a man who’s nearly five-hundred- years old? Well it would be if he wasn’t trying to prove to Jill that he did in fact find her more attractive than the ones he’d turned away.

All my books (apart from 2 I have on pre order) are all now available to read for FREE through Kindle
Unlimited.

This is what you can win. This includes four signed paperback books. Prophecy has been signed by all the authors that attended the Sandbach Book signing recently. 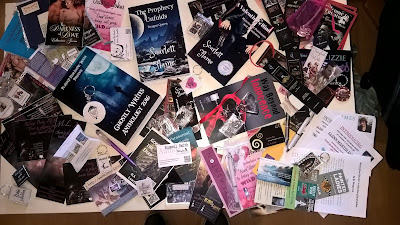 Find out about another new author tomorrow 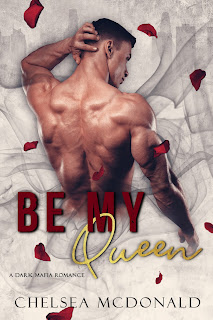